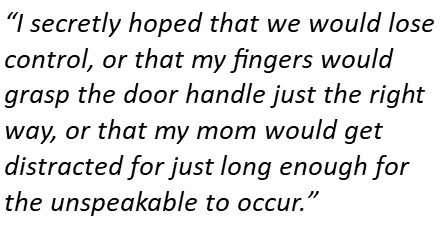 In this series, I will be chronicling the voice of the child. This first excerpt was written by a 16 year old in response to the essay prompt, “Recount a time when you faced a challenge, setback, or failure. How did it affect you, and what did you learn from the experience?”

I first found the song “She Lays Down” by The 1975 when I was a sophomore in high school in the back seat of my mom’s car.  We were speeding down the highway at 11 pm, en route to the backup home that was neither lived in nor sold.  My grandfather explained that he would sell the house when its market value was high enough – an obvious lie seeing as its price had increased steadily over the past couple of years.  The reason we kept the home was because of the instability between my mom and stepdad.  Every month like clockwork, there was fighting, threats of divorce, tears, yelling, and sometimes the police.  “Pack your shit – we’re leaving” became the mantra of the house, and fitting my belongings in a duffel bag was muscle memory.  Despite going through these, and similar, experiences with my sister for almost a decade, I felt utterly alone.  I needed to know that someone understood my feelings of hopelessness and despair.  Enter: “She Lays Down” by The 1975.  While I didn’t “pray that we fall from the sky simply to alleviate the pain,” I secretly hoped that we would lose control, or that my fingers would grasp the door handle just the right way, or that my mom would get distracted for just long enough for the unspeakable to occur.  Music was the only way I could “feel something” and survive the trauma.

There were many times when I wondered why everyone had noticed that my “sun was gone” but no one was helping: no one told me what to do when outbursts and abuse occurred, my court-ordered therapists provided me with no coping skills, CPS seemed to be non-existent from when I was six until I was sixteen.  Most shocking to me was that my school did not have a mental health program.  Their efforts amounted to providing a counselor and teaching a mental health-related chapter in Health Class that was only required to be taken once.  Naturally inquisitive, I expanded my search to surrounding schools.  To my chagrin, most schools in my area mimicked my school’s approach to mental health, with the addition of a one-hour presentation given twice a year.  As I had conversations with my peers, I realized that my circumstances were common; cases of unstable home lives and traumatized teens became the norm and the students’ first defense seemed to turn a blind eye.

I realized I was no longer content with my life song being accompanied by a sorrowful guitar.

Change began slowly.  The first step was to learn about my own mental state, and I found a therapist who was willing to help.  After a few months, I cast my attention to the need of a program for my peers. I researched suicide rates in my county, existing suicide prevention programs, and common causes of suicide. After much searching, I concluded that any program I created had to be different from what existed. Thus the aforementioned mantra changed to “What’s missing?”  Prevention measures were missing, a constant conversation around mental health was missing, student interest for the existing curriculum was missing.  Not One More: A Mission to Eliminate Youth Suicide was born.  I wanted my creation to work for everyone, so I decided to make thirty activities that take anywhere from five minutes to five hours to complete, each activity’s category focused on developing one mental health habit.  My hope was that students can use the habits they learn from Not One More when they’re in situations similar to what I have been through.

So far, the program has spread throughout my school and is accomplishing its mission. Since I have found other ways to “alleviate the pain,” “She Lays Down” has become a song of enjoyment instead of the basis of my survival.